On Tuesday, I did a list with my favorite network TV shows.  Today, I’m going to list my favorite shows from cable, Netflix, or Amazon.  These are in no particular order after #4.  My top 4 are in specific order.

1. Game of Thrones (HBO).  I binged this in less than a month and was hooked.  This show is fantastic, but it is also very confusing, because there are SO many characters to keep up, and it’s in a make believe land.  I feel like I’m googling things constantly just to keep up, but now there is an “after” show, which is awesome.  I can’t believe I waited so long to join the fun.

2. You’re the Worst (FX).  I’m not sure what lead to me this show, but I’m so glad I found it.  This show, in addition to being really funny, tackles the tough topic of clinical depression in a sympathetic manner.  The characters are ‘the worst’ but this show is hilarious, and I’ve turned several people onto it.

3.  Downton Abbey (PBS).  I’m cheating here, but since I watched the first five seasons on Amazon, I’m putting it on this list.  If you haven’t watched Downton Abbey and you have Amazon Prime, do yourself a favor and check out this incredible show.  I’m so sad it’s over.

4. Veep (HBO).  This is one of the funniest shows on cable TV, and regardless of your political party affiliation, you are likely to find this show funny.  I will warn you – it is very vulgar, but it’s got a great ensemble cast and totally worth the watch – it’s a half hour comedy.

5.  Grace & Frankie (Netflix).  Two women, almost 70, discover that their husbands of 40 years have been in a homosexual relationship for twenty years and are tired of hiding their affair, so they ask for a divorce.  This follows what happens next, and how it affects each family.  Top notch cast and great story.

6.  The People vs. OJ Simpson (FX).  This miniseries told the infamous story of the trial of OJ Simpson, who in 1994, was accused (and guilty) of murdering his ex-wife and her friend.  We saw the case from the inside, and I learned several things that I didn’t know happened during the trial.  This show had a top notch cast, who are likely to earn several Emmy nominations.  I would highly recommend this.

7.  Unbreakable Kimmy Schmidt (Netflix).  The shows second season got off to a slow start, but ended with a bang.  Tina Fey (30 Rock) is an executive producer, so if you liked that show, you will really like the story of Kimmy Schmidt, a woman who was kidnapped and kept in an underground bunker for 15 years, then goes to New York to start her life.

8.  The Jinx (HBO).  This six-part miniseries was the story of Robert Durst, eccentric billionaire from New York who is suspected of three different murders in three different states.  Durst himself is interviewed, and is a creepy dude.  This was so well done, and I would highly recommend watching.

9.  Making a Murderer (Netflix).   This 10 part miniseries is the story of Steven Avery, who in 1984 was convicted of rape, only to be exonerated 18 years later.  He then sued the county for $36 million dollars, and while that was going on, was charged with murder.  It’s a seriously messed up story with so many twists and turns.  It starts out slow, but if stick with it, you won’t be disappointed.

10.  Transparent (Amazon).  Transparent is the story of Mort/Maura, a 69 year old man who decides he is tired of living a lie, and decides to live his life as a woman.  The show depicts how his decision affects his family, and more importantly, Maura.  People aren’t real accepting of her decision, and it’s fascinating and sad to watch.  The second season wasn’t nearly as good as the first, but it’s still a good show.

As we come to the end of another year, I wanted to think back to all the great TV I watched this year.  I watch a LOT of TV – network and Netflix.  Some of the shows on this list didn’t come out in 2015 necessarily, but that’s when I watched them.

Here is my list (in no particular order, except #1, where I have a tie):

10.  Daredevil (Netflix) – this Netflix original was one of the darkest superhero shows I’ve seen, and it was also one of the best.  Vincent D’Onofrio’s portrayal of Wilson Fisk was truly one of the year’s best and was the star of the show.

9. Unbreakable Kimmy Schmidt (Netflix) – Kimmy Schmidt was one of the funniest shows I watched this year.  The gif below is me every time I watched it.  Ellie Kemper plays Kimmy Schmidt – a girl who was kidnapped and kept in an underground prison for 15 years who emerges and goes to New York to be on the Today show – and doesn’t leave.  Highly recommend this one.

8.  Modern Family (ABC) – I’ve watched this show from the beginning, and it never disappoints – in fact, I think it’s gotten funnier.  The girl who plays Lily is the funniest character on the show.  I just love her and look forward to this every week.

7.  The Wire (HBO) – I’m 13 years late to the Wire, but it’s arguably one of the best shows of all time.  Inspired to watch by my love of Serial the podcast, which is set in a very corrupt Baltimore, The Wire was an amazing series about police and political corruption in Baltimore in the early 2000’s.  If you have never watched, I would highly recommend, but this show is very adult, so no kids should watch.

6.  Veep (HBO) – Again, I’m late to the game, but Veep is a really funny show.  Julia Louis-Dreyfus stars as Vice President Selina Meyer, who gets no respect from the President and has an outrageously funny staff.  This show is pretty vulgar, so if you don’t like f-bombs, I would stay away from this one.

5.  The Goldberg’s (ABC) – I am a huge fan of the Goldberg’s and I hope you are too.  The Goldberg’s is about a middle class family in Philadelphia in the 1980’s with a completely over-the-top mother (she can be too much at times) and a super sweet grandpa.  This show is so funny and the two young male stars steal the show.

4.  The Grinder (Fox) – Rob Lowe stars as Dean Sanderson, who spent 8 seasons playing “The Grinder” on TV.  The show ends, and he goes home to Boise, Idaho to try to adjust to a normal life.  This show is laugh out loud funny with a good supporting cast.

3.  The Big Bang Theory (CBS) –  By far the funniest show on TV, the Big Bang Theory continues to deliver hearty laughs, even in it’s 9th season.  The addition of the two extra ladies has been spectacular, and watching Sheldon Cooper’s character grow over the past 9 season has been fun to watch.

I have a tie for the number one slot.  These two shows were both phenomenal, though vastly different.  My number ones are:

Blindspot (NBC) – Blindspot is the story of “Jane Doe”, a woman covered in head-to-toe tattoos left in Times Square who doesn’t know who she is or why she’s covered in tattoos.  She has the name of an FBI agent tattooed on her back – Kurt Weller, but she doesn’t know why.  Jane and Kurt have off the charts chemistry, and each week, the team figures out another one of Jane’s tattoos.  Not going to lie, you have to suspend some reality, but this is a fast-paced, high-action show.

And last but certainly not least….

Bloodline (Netflix).  Bloodline is a one of a kind show about a family who are dysfunctional.  All families are dysfunctional to some degree, but this family takes it to epic proportions.  Set in the beautiful Florida Keys, this story about the Rayburn family is engaging (though a little slow in the beginning) and enthralling.  Ben Mendelsohn’s performance of Danny Rayburn should have earned him an Emmy, but this show is really phenomenal and worth watching. 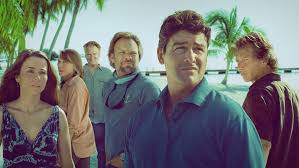