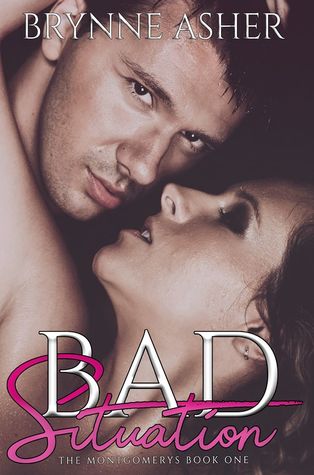 A group of women walk into a bar…

Sounds like the start of a crude joke, right? Yeah, well, the joke’s on me because I’m investigating the gorgeous one in the heels with the great ass. Jensen Montgomery.

Now I’m treading that area between right and wrong, good and bad, where sin and honor meld to become gray. Not that I haven’t been here before. Hell, I’ve made my career in the gray. I never hesitate going to battle when my gut tells me I’m right. And right now, my gut—among other things—is speaking loud and clear about Jen Montgomery.

She’s in a bad situation. Not just bad—deep and black and ugly.

And I’m about to make it worse. She just doesn’t know it yet.

I had NO idea that Brynne Asher, who I am a big fan of, had a new series out, so I was very excited to learn about this book. I was not disappointed.

Imagine you find out that you’re being investigated for fraud by the FBI. Imagine you had a hot AF dance with a man at a bar – then come to realize that man is the FBI agent who is searching your office. That was the case of Jen Montgomery.

Eli Pettit, said FBI agent, knows in his gut that the case against Jen is weak. After meeting her, and breaking his rules, he knows he will do whatever it takes to prove that Jen is innocent – even putting his job at risk.

Ms. Asher writes my favorite kind of male in romances – alpha. And she writes them well. Eli was such an amazing character. He had some mystery surrounding him, which I loved. I felt that his story was real and very interesting.

Jen is the sister of Cam Montgomery, from the Carpino series, and I was thrilled to see an old friend back (I’ve read all of the Carpino series – and the Vine series). There was family drama, and this book had a bit of suspense and mystery, which I loved.

I loved Jen. She was a real kick ass character. She stood up for herself and was incredibly loyal to her family.

The book also set up the next book in the series very well, and I”m quite intrigued to read the next one.

I very much enjoyed this story, and can’t wait to read the next book in the series.

I would highly recommend.