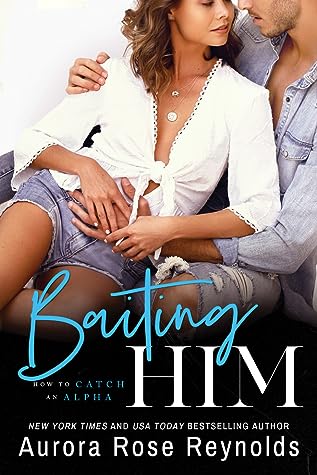 Chrissie doesn’t have time for guys, hot or otherwise; most days, she barely has time to sleep. With a thriving bakery that demands her attention and plenty of proof that relationships aren’t worth the trouble, she’s content to go it alone. Too bad she’s unwittingly baited Mr. Tall, Dark, and Way Too Gorgeous—and he’s just waiting for a chance to bite.

Gaston is used to getting what he wants, but he also knows nothing good ever comes easy. From the moment he meets Chrissie, he realizes that this woman who makes him laugh, smells like cupcakes, and looks like a tasty snack is going to be his greatest challenge. And if he’s lucky, she’ll be his biggest reward.

But someone else wants to catch Gaston at all costs—even if it means endangering the lives of the people he loves. Somehow Gaston must thwart danger and convince Chrissie that he’s the perfect catch.

I’m a big fan of Aurora Rose Reynolds and her alpha males, and hooray! We got a great alpha male in Gaston (good luck getting that song out of your head now, lol).

Gaston (who has a dog named LaFou – no joke) is such an amazing characters. He’s true alpha – he sees Chrissie and decides he wants her – and that’s it. At times, it seemed like he was too good to be true, but in a really great way.

Chrissie was a very likable character, but man did she have a lot of family drama going on. I enjoyed the story with her family, and meeting her brother and his fiance. Chrissie is the best friend of Leah, from book 1 in the series, so we got to visit with Leah and Tyler again.

I plowed through this book in one day – it was a very quick, fun read. I love ARR’s characters and side characters, and I loved them in this book.

My one criticism would be that the “drama” in the book was entirely too predictable.  I would have preferred something a little tougher to figure out.

Overall, I really enjoyed this story and would recommend it.