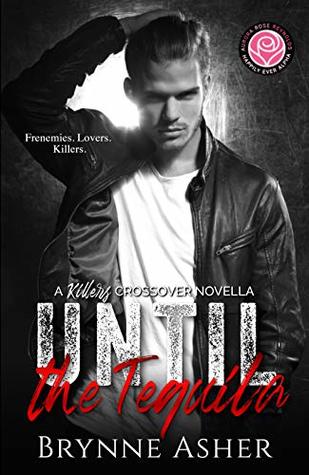 Title: Until the Tequila
Author: Brynne Asher
Rating: 4 stars
Genre: Romance
Where I got it: Kindle Unlimited

Tequila: a distilled beverage made from the blue agave plant and, in Mary’s case, a truth serum.

It took one night.

No, it took one dinner, a bevy of cocktails, and a woman who’s been skirting me for months. Then, everything changed. Because the tequila did what it does best, Mary’s words flowed faster than the magic liquid she was shooting with salt and lime.
Mary had demons—ones she thought were buried. She thought wrong.
She can’t hide from her past or from me. Not anymore.
I’m Evan Hargrove and I’ll turn the world red before I let anything happen to her.

I love these Happily Ever After novellas. I love the Brynne Asher Vines’ series, so I was excited when I saw this book.

This was a short book, but it packed a lot into a short story.

Mary is a hairdresser, and has moved to Virginia from Tennessee, where she moved away to get away from her horrible father. Her father gets out of prison, and goes back to the town she’s from, and he starts asking about her. Her friend, July Mayson Silver (from Aurora Rose Reynold’s Until series), warns her that her father is looking for her, at the same time that Evan Hargrove decides he’s ready to make Mary his.

Evan is a total alpha. He decides he wants Mary, and that’s it. Once he finds out she’s in trouble, he’s basically moving her in with him. Evan works for Addy at the vineyards (Vines series), but his family is a breeder of thoroughbreds and he’s quite wealthy.

Mary, on the other hand, grew up in foster care and is convinced that she and Evan don’t work. Evan doesn’t agree, and you can imagine the rest.

There was some drama with her dad that added to the story.

But the ending is what was the best. I really loved the epilogue. I would recommend this book. It was really good.