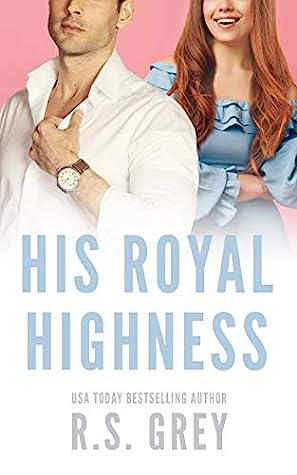 But the day he walks back into my life, I realize there are two things time has yet to soften: my feelings for him and his chiseled jawline.

It’s infuriating that my heart still races when he walks into a room. I refuse to fall prey to old unrequited love, so I decide the less I’m around him, the better. Avoidance is key.

Unfortunately, Derek isn’t going to make it easy. As a teenager, I would have crawled on my hands and knees to attract his attention. Now I can’t seem to escape it.

I’m not sure why he’s bothering. He’s not just out of my league—he’s out of my tax bracket. As the sole heir to the Knightley Company, he’s as close to American royalty as you can get. As for me, I’m just a part-time princess at Knightley’s flagship magical theme park.

I spend my days playing make-believe, but Derek has no use for fairytales. His unwavering confidence makes it clear he thinks I’ll surrender in the end.

Omg, I LOVED this book. I loved everything about it. The characters are great, the story is great. it’s just great!

Whitney works at an amusement park, very similar to Disney. She is the star of the show, Princess Elena. She started at the park when she was a freshman in college, and had a mentor, named Derek Knightley, who is the grandson of the owner of the park. She had a huge crush on him when she was 18, and he abruptly left, leaving Whitney devastated.

Fast forward 8 years, and Derek is back. Turns out he moved to London to open the London park, and now he’s back. His grandfather, Cal, took over as Whitney’s mentor, and they are very close, having dinner every week. Whitney is shocked to see Derek again, and Derek is shocked at grown up and beautiful Whitney now is.

This book talked about the underground of an amusement park. I’m guessing this is based on what really happens at a park like Disney, I found it fascinating.

Whitney and Derek’s story was a great one. There wasn’t a ton of drama in this story, there were great side characters, and an interesting story with Whitney’s family.

Ms. Grey continues to write these amazing stories, and I will continue to read them. This one is great and I recommend.

2 thoughts on “His Royal Highness by R.S. Grey”