It’s been nearly a decade since Elle Sloan last saw Luke Hutchins. Close to ten years since she broke up with him over a single phone call, providing him with little explanation. Since the end of their relationship, Elle has done everything she could do to move on, marrying, proceeding forward with her life, almost allowing herself to completely forget about Luke.
Almost.
Out of nowhere, Elle receives a phone call from Luke’s mother. Luke has been in a horrific car accident and, a month later, has just awoken from a coma. However, instead of celebrating, his family is stunned to learn that Luke is suffering from amnesia and only remembers his life as it was before his breakup with Elle. Not wanting to tell Luke that he and Elle aren’t together anymore for fear it may compromise his recovery, Elle is asked by Luke’s family to come to the hospital to see him. Their hope is that she will slowly be able to jog his memory and cushion the blow.
Guilt-ridden over how their relationship ended, Elle readily agrees, finding herself transported back in time with Luke to the life they once shared and the future they could have had together.

I heard voices even before I stepped inside of the room. They were soft, but one by one, I was able to discern who was speaking. The first voice struck me like a freight train, catapulting me further back in time with each word he spoke. The second one made my heart skip a beat.

As I walked farther into the room, I saw another vision of my past sitting next to the hospital bed. His attention, at first, was entirely focused on the occupant in the bed, until movement from me diverted his attention to me. He locked eyes with me, surprise on his face quickly turning to an odd combination of contradiction. Anger, excitement, and suspicion all appeared to be waging war and were enough to give me whiplash just looking at him. Peter Monroe—or just Monroe, as he preferred to be called—had been Luke’s best friend since pretty much the dawn of each other’s existence. He’d aged. His boyish good looks had hardened into a man who would have been difficult to recognize to me, save for the same square chin, overly large nose, and mischievous eyes I had remembered so fondly.

Another step inside the room revealed a sight I had fought valiantly to keep from infiltrating my dreams for the last several years. Like Monroe, he didn’t notice my arrival at first, and I was grateful for that because the shock I was feeling at that moment would have undoubtedly transferred onto him. His head was turned, his eyes, from what I could see of them, were closed. Most of his features were facing Monroe, but from what little I could make out of them, he looked exactly how I remembered him. The rest of his body, however, was a different story.

His hair had begun to grow back after having obviously been recently shaved to prep him for surgery. On the side of his head that was visible to me, a bandage was secured to his scalp just above his ear and was wrapped around his head. Both of his legs had been broken and were secured with immobilizers, resembling large boots. He’d been through hell and back physically, and I feared he’d soon go through the same emotionally, all because of me.

Tears fell down my face before I even had the chance to realize they had formed. Not wanting Luke to see me upset, I dabbed my eyes with my sleeve and did my best to maintain my composure before he realized I was there. With a lump in my throat, I took a step closer to the bed, approaching it on the opposite side of Monroe. There another chair sat, which I was grateful for in the event my legs felt like they were going to give out on me. Monroe sat watching me expectantly, silently screaming at me to announce my presence and put an end to the torment Luke must have been going through since regaining consciousness.

Closing my eyes, I took a breath and spoke. “Luke.” 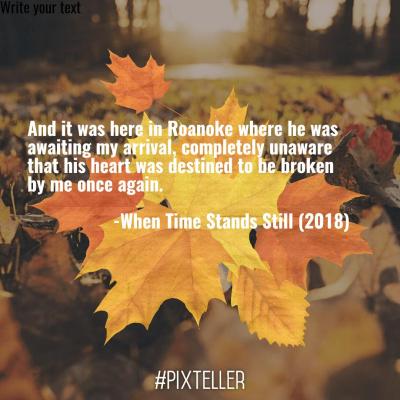 Sara “Furlong” Burr was born and raised in Michigan and currently still lives there with her husband, two daughters, a high-strung Lab, and three judgmental cats. When she’s not writing, Sara enjoys reading, camping, spending time with her family, and attempting to paint while consuming more amaretto sours than she cares to admit. She’s also an advocate for melanoma awareness, having been diagnosed with stage 1b melanoma in 2017.
You can learn more about Sara at http://sarafurlongburr.blogspot.com, follow her on Twitter via @Sarafurlong, and read more of her ramblings via Facebook at https://www.facebook.com/EnigmaBlackKindle.

This sounded like an interesting concept – ex-boyfriend ends up with amnesia and thinks you’re still together and that it’s 2008 – but in reality, their relationship ended badly and they haven’t seen each other since 2008.

Elle has moved on with her life – married to a man she is clearly not happy with, going through the motions, doing a job that is never really explained. She gets a call that Luke, her first love, had been in a terrible accident and kept asking where Elle is – and in their desperation, his family reaches out to Elle and asks for her help. Elle doesn’t hesitate to help Luke. She feels guilty about how things ended with him and feels she owes it to him to help with his recovery.

Luke Hutchins – my new book boyfriend. Man, did I love this guy. He was amazing. He was so sweet to Elle, loving, caring, always boosting her up. Elle came from a rough childhood and had some issues, issues that Luke didn’t care about. He loved her, no matter what. Too bad Elle couldn’t see that.

Once Elle goes back to Roanoke to be with Luke, she quickly realizes how much she misses his family, most especially his parents, Candy and Tom. Luke’s best friend Peter is part of the mix, and he’s not real happy to Elle, because of how she ended things with Luke.

Elle does help with Luke’s progress, though they have to watch what they say and what they do and not give away the real year. I liked the progression of the story, though it was a little long. The book jumps back and forth between the past and present, and we get to see Elle and Luke’s relationship develop.

My one criticism is the end of the story. There is a shocker that comes out of nowhere and isn’t really explained well, but it didn’t really take away from the story.

The story was missing an epilogue, which was badly needed.  I needed closure, which I didn’t get. I liked the ending, but needed a glimpse down the road.

Overall, this book was good, held my attention and kept me interested. I would recommend it.