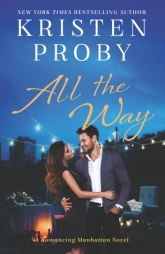 Title: All The Way
Author: Kristen Proby
Rating: 4 stars
Genre: Romance
Where I got it: Public Library

Finn Cavanaugh is known for being a force to be reckoned with in the courtroom. He owns a successful law firm with his brother and brother-in-law in Manhattan. On the rare occasion that he has down time, he spends it at his home in Martha’s Vineyard. But when Finn’s troubled niece goes to stay with him for the summer in Martha’s Vineyard, he’s reluctant to take time off from work. That is, until he meets his beautiful new neighbor, London.

London Watson is a Tony Award winning actress on Broadway. When tragedy strikes her family, leaving her alone and injured, she flees Manhattan for Martha’s Vineyard. Hoping she can figure out how to pick up the pieces of her life, London is convinced that she’ll never be able to return to the stage. But when she meets the charming young girl next door and her sexy uncle, they soon lure London out of her shell as she finally begins to heal from the wounds of her past.

But when London feels confident enough to return to the spotlight, she’s dealt another devastating blow. Will the newfound love between London and Finn be enough to conquer all? Or will it be over before it has a chance to grow…?

If you have read my blog, you know Kristen Proby is my favorite author. I love her, so I was very excited to get my hands on this new series. It was good, but not great.

London Watson has just lost her parents in a fire, one where she was badly injured. She’s the Kristen Chenowith of Broadway – and thanks to her injury, she can’t perform and she’s devastated. After hearing her parents will, she heads to their family home on Martha’s Vineyard to recuperate and grieve.

Her parent’s lawyer, Finn Cavanaugh, happens to live next door to London’s house on Martha’s Vineyard, and has taken a few weeks off to go there with his niece, Gabby, who lost her mom and is struggling. Gabby and London take to each other quite quickly, and I liked there storyline.

Then, at about 25%, Gabby leaves with her grandma and we don’t hear from her again. She’s part of the summary, and she was quite a cute character, so I was a little bummed that she was kind of abandoned. We saw her a little at the end of the story, but that was it.

There was also a storyline with London’s brother, Kyle, who is a drug addict and was cut out of the will unless he checks into rehab. This storyline was really predictable and didn’t add too much to the story. I didn’t love it.

I’m hoping the next story is about Quinn, Finn’s brother. There is also Gabby’s father, Carter, who deserves a book.

I did like this story, despite the fact that there was no epilogue and some of the stories weren’t finalized. Maybe they will be in the next book.

Despite not loving this  book, I did really like it and I would recommend it. You tend to do that for your favorite author:)

3 thoughts on “All The Way by Kristen Proby”