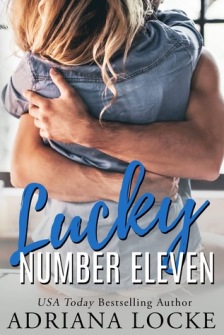 I’ve always been the person that does whatever someone tells me I can’t.

Can’t graduate with a four-point-oh? Check.
Can’t win a modeling contract without trying? Did it. Check.
Can’t make it in the pro football league? Triple check with an MVP Award on top.

When my best friend told me to stay away from his little sister, Layla, it didn’t sound like a challenge. Then again, I’d never seen her before.

Fact of the matter is: I not only fell harder than a quarterback sack on a Sunday night game, but I did us one better. Kind of like that MVP award, only not so shiny. Sort of like my Player of the Year title, except the only thing I’m walking away with is an ex-best friend and a woman that hates my guts.

It’s okay. Just tell me I can’t win her back.

I’ve read several Adriana Locke books and have enjoyed them all, so I assumed this book would be equally as good. Sadly, I was a little disappointed.

Firstly, this description above is not really descriptive of what this book is about. This story is about Branch Best (hate the name), a wide receiver on the Chicago Legends football team. He is best friends with Finn Miller, another Legends player. The guys head out to the Miller’s family cabin for the weekend, and don’t realize that Finn’s sister, Layla, and her best friend, Poppy (who Branch occasionally hooks up with) are going that same weekend.

I’m sure you imagine what happens. They hook up; can you guess what happens next? You can, so I won’t spoil it. The middle of the book has Branch getting the shit beat out of him by Finn and Layla hating his guts.

I think the book would have been better if it was told differently. Branch was a really good guy, but up until about 50%, you didn’t really know it. He seemed like a self-absorbed douche up until that point. Layla was kind of a bitch at times. Finn was WAY too overprotective of Layla. It wasn’t really believable.

The best character was Poppy. She was funny, sweet and seemed like the most real character in the book. There was a tabloid to the story, focusing on Finn and Branch and their off-field exploits. That stuff doesn’t happen in Chicago. Trust me, I live here.  Athletes probably love living here because we both revere them and leave them alone.

This wasn’t my favorite book by Ms. Locke, but I will read her again.